For assistance call our Helpline at:

History of the Society

The Beginnings of the Society of St. Vincent de Paul 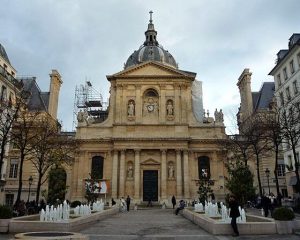 Frédéric Ozanam left his home in Lyon, France, in the autumn of 1831, for Paris.  He registered in the School of Law at the Sorbonne, University of Paris. Frédéric collaborated with Mr. Emmanuel Bailly, editor of the Tribune Catholique, in reviving a student organization which had been suspended during the revolutionary activity of July 1830. They called their new association "The Conference of History." The group met on Saturdays to discuss various topics, everything but politics.  At one of their meetings, a student challenged Frédéric and the practicing Catholics. He admitted that the Catholic Church had done much good work in the past, but "what do you do now?" Frédéric called for a meeting of five of his friends; they agreed to meet at Mr. Bailly's office. The date was April 23, 1833, Frédéric's twentieth birthday. Inspired by their words, Frédéric decided to found the "Conference of Charity" to assist the poor. Emmanuel Bailly, the married layman, was chosen by the six students as their first President. In a short time, they changed their name to The Society of St. Vincent de Paul in honor of their patron.

Blessed Frederic Ozanam(1813 - 1853) was founder of the Society of St. Vincent de Paul. Frederic was a husband and father, professor and servant of the poor. He

The Society of St. Vincent de Paul in the United States

While historians are not certain about some details, there is no doubt that the Society of St. Vincent de Paul was established in St. Louis, Missouri at the Basilica of St. Louis, King of France, popularly called "The Old Cathedral," in 1845. Father John Timon, CM, an American Vincentian priest from Pennsylvania, and later Bishop of Buffalo, New York, was the one who brought copies of the Rule of the Society of St. Vincent de Paul back from Dublin, Ireland, to St. Louis. Timon talked to various people about the Society and its wonderful work with the poor. Bishop Peter Richard 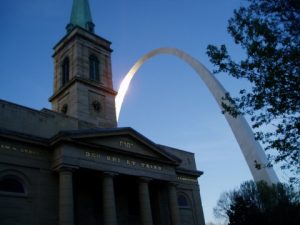 Kenrick, successor of the first Bishop of St. Louis, Joseph Rosati, CM, asked Father Ambrose Heim to establish the Society of St. Vincent de Paul and be its Spiritual Advisor. Father Heim was known by all for his extraordinary zeal and ministry with the poor. He became known as "The Priest of the Poor." The first meeting of the Society of St. Vincent de Paul in the United States was held on November 20, 1845, only twelve years after its foundation in Paris. Nineteen of the most prominent Catholic laymen of St. Louis attended. Dr. Moses Linton was elected President, Bryan Mullanphy, Vice President, Dennis Galvin, Second Vice President, James Maguire Jr., Secretary, Patrick Ryder, Treasurer, and Fr. Ambrose Heim, Spiritual Advisor. The Conference was aggregated (formally recognized) by the Society's International Council in Paris on February 2, 1846.

impoverished district of Paris. Emmanuel Bailly, the President of the Society, sent the founding members of the Society to Sister Rosalie for guidance and direction. Sending them on home visits, she formed them in the spirit of St. Vincent, teaching them how to serve the poor with respect and compassion.

St. Vincent de Paul (1581-1660) was founder of the Congregation of the Mission, Daughters of Charity, Confraternities of Charity, and Ladies of Charity. A man of deep faith, keen intellect, and enormous creativity, he has become known as the "The Apostle of Charity" and "Father of the Poor." His contributions to the training of priests and organizing parish missions and other services for the poor shaped our Church's role in the modern world.

St. Louise de Marillac (1591 - 1660), a contemporary of St. Vincent, was inspired and directed by Vincent's spiritual leadership. She was Vincent's collaborator in founding the Daughters of Charity and organizing hospitals for the sick poor, asylums for the orphaned, workshops for the unemployed, championing literacy for the uneducated, and establishing standards for local charities. Louise was a wife, mother, teacher, nurse, social worker and religious foundress.